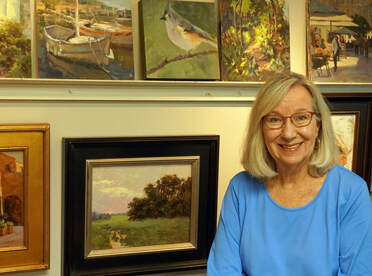 Dede has spent over 20 years pursuing her passion for art and painting. Although a native of Florida, Dede’s formal training was done in Colorado, where she received a Bachelor of Fine Arts degree in Painting from the University of Denver, and a Degree in Art Education from the University of Colorado. Her early work was heavily influenced by the stark vistas of the west, where she focused on abstract landscapes, rendered in mixed media. Since relocating to Georgia, she has turned more to representational art in oil media, and especially enjoys the challenge of plein air work, with an emphasis on capturing the soft lighting of the lush, southern landscape and coastal areas.

Throughout her career, Dede has continued to study painting through classes and workshops with a number of well-known professionals. She has been particularly influenced as a result of study with well known local portrait artists, Marc Chatov, and Jim Schell. Also important, have been a variety of workshops and classes with nationally known artists  including Bill Davidson, Barbara Jaenicke, and Jim Richards.